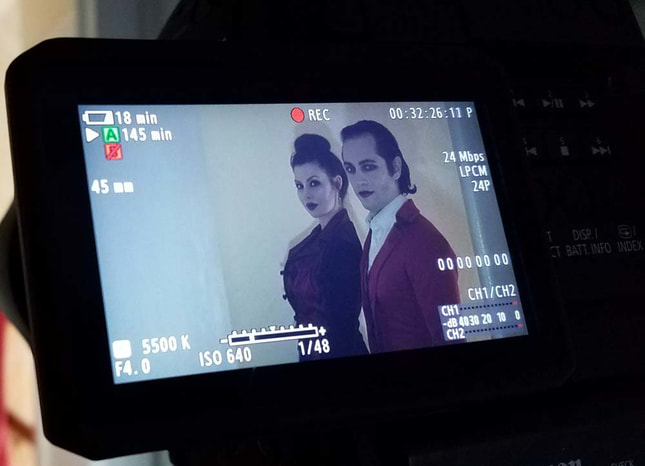 2019 FILMS
July 18, 2019
​
12-2P
BARNEY BURMAN'S WILD BOAR
A small group of Geocachers -- modern day weekend treasure hunters -- go searching in the desert for a bounty left by an eccentric billionaire. Instead they end up being hunted by a mutant boar with an axe to grind. (feature)
directed by Barney Burman (Oscar Winning sfx artist)
Daniel Roebuck, Reina Hardesty, Augie Duke

2-4P
THE INSIDE WORLD
A mysterious stranger unknowingly enters a world of danger and paranoia.
directed by Mark Barnett

ANIMAL AMONG US
Fifteen years ago, two teenage girls were murdered at Merrymaker Campgrounds. The case was filed an animal attack, the camp was condemned and the killer never found - but something horrific still waits in those woods. (feature)
directed by John Woodruff
Larisa Oleynik, Erin Daniels, Heather Tom

WATCHING
A man wakes. Is he alone?
directed by Salvatore Scirica

3 1 6
A woman explores a campus building that she's never been to... before she knows it, she's too far gone.
directed by Richard Imburgio

DUST TO DUST
An author of Vampire books that is going through a spell of writers block is confronted by a self proclaimed vampire that accuses the author of giving away his dark secrets.
directed by Mitch Urban

NIGHT OUT
A deranged, drug fueled man murders women, using a super 8 camera to film their dying expressions of terror. The memories of the murders later haunt his mind.
directed by Drew Maxwell

RAMONA
A small town is changed forever on a cold morning in 1983 when a shocking, supernatural event occurs after a tragedy.
directed by Nicole Harris

THE ATTACK
A young woman is hunted by a man on a sinister mission.
directed by Vincent Cotroneo and Emily Short

JERICHO BRIDGE
After a ghost tour through the hills of Maryland, a young hiker finds herself face-to-face with true horror, discovering that all legend has an origin in truth.
directed by Jordan Miller

PROTECTING WINTER
A Police officer haunted by the spirits of a serial killer's victims, must search to find the killer before he strikes again.
directed by Joshua Nelson and Saniye Reyhan

8-10P
BUY IN
A charming young salesman and a strange, lonely traveler find themselves locked in a struggle for control over their own destinies.
directed by Bri Castellini

DIRT
Penny, a troubled runaway, is picked up hitchhiking by a group of friends on a camping trip. But after trekking deep into the forest, she soon realizes this group is not seeking the ideal camping spot after all, but something much more sinister.
directed by Lyndsay Sarah

TELL ME SOMETHING GOOD
A maniac takes 3 innocent people hostage in hopes of finding inspiration.
directed by Sean Feuer

THE HELPING HAND
With a new baby at home, young parents adopt a hi-tech monitoring system. Will it be an answer to their woes or have they invited a monster into their home?
directed by Brenden Hubbard
from the Academy Award winning team behind Curfew

THE HUNTED
Luke Wallace is a paranormal hunter who is able to communicate with ghosts of murdered victims. One particular ghost leads Luke to a young woman named Claire, who he realizes is a kind of opponent he's never faced before.
directed by Giancarlo Orellana

HOW TO BE ALONE
When her husband JACK leaves for the hospital graveyard shift, Lucy is left alone in the company of a particularly menacing kitchen cabinet, which she is convinced contains all her most secret fears.
directed by Kate Trefry
Maika Monroe, Joe Keery (Stranger Things)

Create your own unique website with customizable templates.
NHF